Devonian Period - The oldest evidence of life in our town
380 million years ago, the area we call our town was at the bottom of a shallow ocean. The evidence of life that existed then can be seen almost anywhere in the bedrock. Just walk along Flint Creek, the Canandaigua Outlet, or Swale Brook and the earliest life will be more than evident. Horn coral (rugose coral), sea lilies (crinoids), trilobites, clams (brachiopods), snails (gastropod), mollusks (ammonoidea) and bryozoan (small sea animals that lived in colonies) are abundant in the fossil record of your own back yard.
(“Common Fossils of Central New York” Paleontological Research Institution – Museum of the Earth, Ithaca, New York)
That Horn Coral (heliophyllum halli) from your backyard
Dr. Ronald R. Grube
In my backyard, and probably yours too, can be found hundreds of fossils. They are a part of Phelps’ history. These fossils are from the Devonian Period (about 420 to 360 million years ago). Phelps, then, wasn’t where is it today. Back then, we were part of a continent which today we call Euramerica. Our part of Euramerica was roughly at or below the equator. This was about 100 million years before the continent you might know as Pangaea. Pangaea, by the way, was the continent that broke apart to create our present configuration (due to continental drift).
I thought I might show a common fossil that I find around here. It is called heliophyllum halli or horn coral. During the Devonian Period, we were located at the bottom of a shallow sea found upon the Euramerican continent. The area west of the Appalachian Mountains and reaching out to Ohio (called the Appalachian Basin) was a shallow sea. Our fossils confirm that. All of our fossils are those of sea life. Heliophyllum halli was a coral. Its pointed end was fixed by roots to the bottom of that body of water – you know, my back yard – and yours. Like modern coral, heliophyllum halli grew in stages. The lowest stages died and calcified. The upper stage, newest stage, was alive with tentacles that would bring the food it caught into a mouth and then to a stomach. The bottom of the lively part of the coral was a basal plate made up of the dead and calcified parts of the coral separating the dead from the living. This is the part that became fossilized.
This specimen on the left below that my grandson Robin found in the yard is about six inches long. Some horn coral grew to thirty inches. This coral was generally solitary and usually not colonial. Obviously, we do not know what colors the tentacles were as they would not be a part of the fossilization. Heliophyllum halli could look something like the drawing on the right.
The vertical lines shown on the fossil on the left above were on the inside of the animal. They are called Septa and carinae. These can be seen on the second specimen pictured below. The septa and carine carried the food to the mouth.
Below are two pictures of another Horn Coral, also found in the creek I refer to as Vienna Brook, which crosses under South Wayne Street. What you are seeing is a cross section of the coral. Around the external edge of the animal is where the tentacles were located and in the center of the animal is where the digestive process would occur.
Heliophyllum halli was a carnivorous animal. The living polyp was found at the top of the animal, and it consisted of tentacles that grew out of the outer edge of the coral. The tentacles would sting and hook its prey as the plankton and fish floated by. From there, the prey would be carried to the mouth in the center or calice (shown above as those lines traveling from the exterior to the center).
An outer layer of horizontal wrinkles (see below) would be the part that you would see below the living part (polyp). These wrinkles develop daily as the coral grew – perhaps as many as 400 a year. 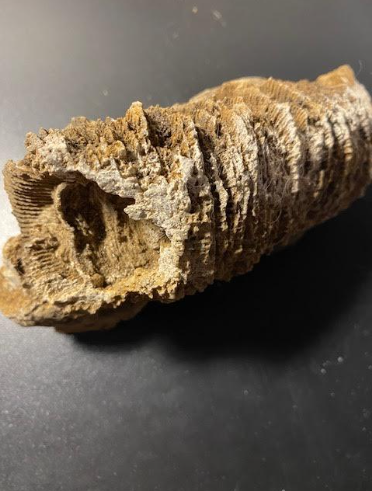 The successor to Dr. Joel Prescott’s practice was his nephew (son of brother Ezra) of the same name. In 1807 he had come to read and study with his uncle. Although in his early twenties, he had marked talent for the profession and proceeded with caution under the guidance of Dr. James Carter of Geneva  with whom he continued his studies. He continued to practice medicine in the township until 1839 when he moved to Wayne County, first to Macedon then Newark
Dr. Joel Prescott, 2nd, was very active in the cause of education and was one of the founders of the Oaks Corners Academy. In this institution many young men profited by the thorough course of instruction given in the College Preparatory work. The classes were housed in a fine brick building near the church. This  burned down at the same time the church burned in 1915.
In 1810 he married Clarissa Stearns, daughter of Mr. Joel Stearns who was one of the first settlers on the present site of the village of Phelps. They had five children: sons Joel Hayden and George Stearns Prescott, daughters Mrs. W. Clark Crosby (Sarah) , Clarissa (who died at the age of 21) and Mrs. Joseph Rice (Elizabeth).
While Joel Hayden Prescott (great nephew to our first Dr. Prescott) did not pursue a career in medicine, he did share his father’s interest in education. He was educated in the common and select schools, and completed a course preparatory to entering the academy at Oak’s Corners. He taught district school for several years and was an assistant teacher in the Seneca Falls Academy. In 1835 he became clerk for John R. Green of Phelps where he remained until 1837. During the next three years he was in business with the late Cornelius Horton.
In 1840 he moved to Lyons and in 1844 went to Newark where he conducted a general store until 1854. He then accepted a position as secretary of the Wayne County Mutual Insurance Company and held that position until 1869 when it discontinued business. Since that time he had made insurance and real estate his business. He served as president and trustee of the village of Newark for 10 years. He had held the position of postmaster nearly eight years, it being the first presidential appointment in the village.
In 1851 he became one of the founders of St. Mark’s Episcopal Church and served as vestryman and warden.
At the time of his death in 1902, Newark, NY,  he was survived by his children; two daughters, Mrs. Henry Pierson and Clara Prescott, and two sons Joel H. Jr.  and T. Davis Prescott.
Dr. Joel David Prescott, son of Imley Prescott and maria Cross,  and grandson of our first Dr. Joel , was born on July 21, 1821 in Phelps, NY. He had been a fireman and was a machinist for the Silsby pump and fire engine manufacturing firm in Seneca Falls, NY. Prescott accompanied Horace Silsby in delivering Chicago’s first steam fire engine in 1858. Following the city’s performance testing of the engine, Prescott remained in Chicago as engineer on the “Long John” and was the first paid, full - time fireman  on the Chicago Fire Department. He was a founder in 1863 and served many years as treasurer for the Benevolent Association of the Paid (Chicago) Fire Department. His relationship with the association and Chicago’s fire fighters continued the remainder of his life.
After nearly seven years with the fire department he left to attend Rush Medical College (Chicago), graduating as a physician in the class of 1867/1868. For a number of years he operated medical baths, first on Madison and later on South Desplaines Streets in Chicago. On he night of July 9, 1882, he was brutally murdered during an apparent robbery attempt at the baths. According to an inquest, the cause of death was “shock and hemorrhage caused by a blow with some heavy and round instrument upon the head causing fracture of the skull and disconnection of a large portion of the brain…” The murder and investigation was heavily covered in the Chicago newspapers and was also reported in numerous newspapers across the country. Although a suspect was identified, arrested, and was believed to have committed the crime, no trial was held and the crime remains unsolved.
Dr. Joel David Prescott married Rachel Dunham Prescott in 1843. Between 1844 and 1863 they had seven children; three daughters, and four sons, one of who was named Joel Dunham Prescott, who died at the age of 44 having never married.
A Chicago Tribune report of his funeral said, “ Dr. Prescott        was one of the founders, and it is believed the oldest member of the Benevolent Association of the Paid Fire Department, and the tribute sent by officers and Board of Directors of this association was a most magnificent one.