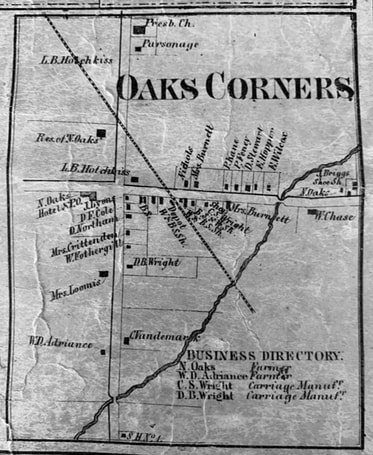 Dr. Ronald Grube, June 2021
​One can never overstate the importance of Oaks Corners to the history and development of Phelps. It is fitting that of the many school districts in Phelps, Oaks Corners is District # 1. Jonathan Oaks built “a large framed public house in Oaks Corners in 1794” (Historical Sketches of Western New York by Elisha Woodward Vanderhoof, page 31).  In 1794, a room in this tavern was given to serve the educational needs of the children of the area. For the next five or six years the tavern served as the school until a log schoolhouse was built. In 1818, a brick building was built by the neighbors who would benefit from the school. This was District number one.
People pledged all sorts of things to complete the 1818 brick schoolhouse. Our Howe House museum has the original document on the wall in the east room that shows what was pledged and who pledged it. Families and individuals pledged money, “lumber, grain, whiskey, neat cattle (steers), glass shingles, shoes and boots, nails, and labor”  (Mabel Oaks. “Oak Corners 1790 – 1976”, page 11).  The building was constructed on a steep hill that apparently caused a lot of falls for the little students on wet or snowy days (Helen Ridley “When Phelps Was Young” p.59). Helen Ridley explained how the school was designed “after the English style; with a series of graded platforms or steps. As the student advanced in his studies he sat in a higher row of seats until he had reached the ‘upper form’. A Mr. Eaton was the teacher and small poplar trees were set about the grounds while he was in charge. He was very proud of the trees and woe to anyone who went near them! A woman who had been his pupil wrote, after seventy years had passed away, relating to many things. She told how very fearful she had been to go near the little poplars, ‘lest my dress brush them’”(Helen Ridley, When Phelps Was Young” pp. 59-60).
The first school was in the tavern on the southwest corner of the main intersection on the map to the right. The brick schools were located on the east side of Preemption Road at the very bottom of the map. A second brick building was erected on the spot of the first, apparently after the steep hill had been cut down. This school building is still standing in Oaks Corners. Click on the map to open a new page with a high resolution version. (Click on that photo to magnify.)


​Written on back of this photo from the early 1900s: My sister Margaret and I (Mabel) are circled in red. Leonard and George Bland are shown . Madeline Oaks (short hair) stands next to Miss Agnes Coughlin, teacher Oaks Corners School. ( Margaret is girl with short hair, circled) and (Mabel Oaks, nee Cook, is on the left, hair in braids, circled). Leonard and George Bland (seated, second row, first on left and third row fifth on right). Leonard became the hired hand on Nathan Oaks' farm and worked there until his death. 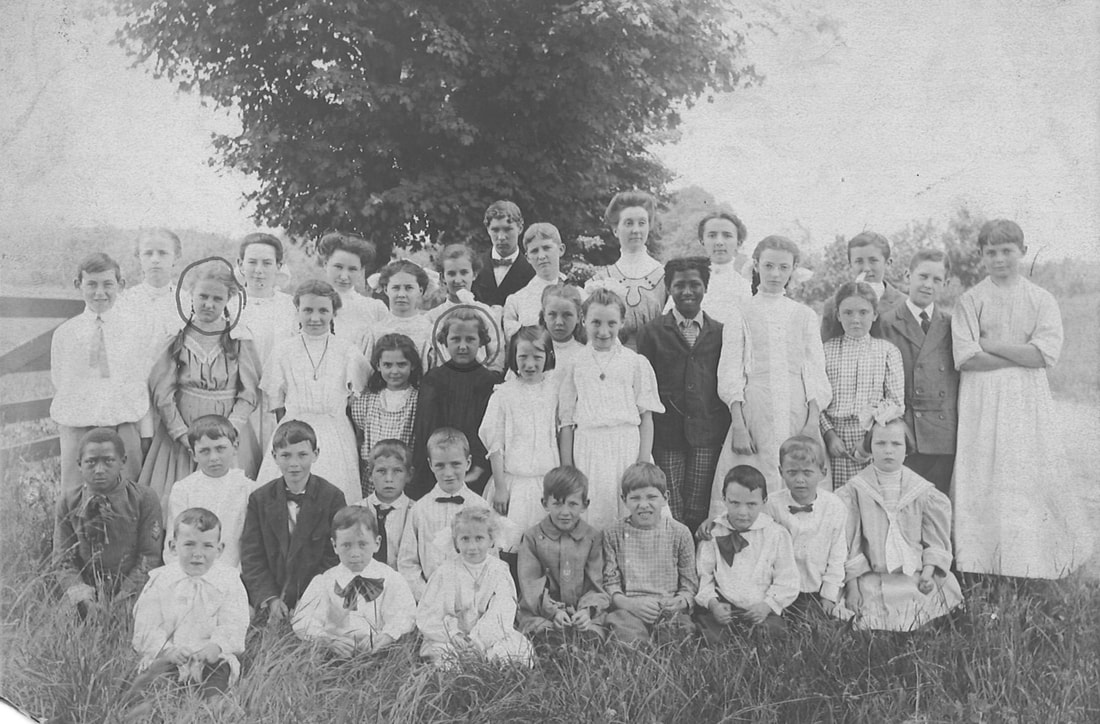 If you have any history to add to this story please submit the Schools Suggestion Form. 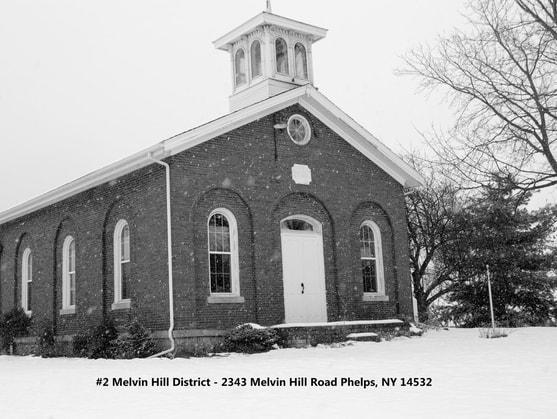 Dr. Ronald R. Grube, July 2021
Around 1805, a log schoolhouse was built on top of Melvin Hill. Presumably, Jonathan Melvin provided the land for the children of the area. In 1817, when the town developed the district system, Melvin turned the school over to the town to create school district # 2. A wooden frame schoolhouse replaced the log school and was used until 1870. The school was then replaced by a brick structure that still exists today on the corner of Melvin Hill Road and County Road 23. Classes were held there until the Phelps Central School District # 1 swallowed it and most of the other one room schools in 1940. After the suspension of classes on Melvin Hill, the school became a private residence, as it is today.
Very little is known by the Phelps Historical Society about this and most of the other one room schools we will write about. That is one of the reasons we are writing these brief accounts. If you know any specific history about any one or more of the 24 school districts serving the children of Phelps, we encourage you to tell us what you have learned. The pieces of information specifically about the Melvin Hill school comes to us from Helen Ridley’s book “When Phelps Was Young”, chapter 10 on schools. Mabel Oaks’ brief statement about Melvin Hill in “Phelps Footprints” pages 21-28 and odds and ends in the museum, including the photographs in this article.
We are fortunate enough to have this new piece of history about the Melvin Hill school. Rosa Grube gives us this information about School District # 2:

Rosa F. Grube, July 2021
My grandmother, Beth Harland Kregloh, shared her memories with me of teaching, in 1912 and 1913, at the one room school at the top of Melvin Hill.  She had taught in England before immigrating to the United States but found that teaching in a country school in Phelps was a unique experience.
The children were at various ages and class levels.  Gram would teach one group as the others worked at their desks.   Gram said that many of the older students were helpful in working with the younger students and in that way reinforced their own understanding of subject material.
What Gram hadn’t expected, when she took the job, was that she would have to be at the school to prepare for the day long before the students arrived.  She chopped wood for the stove and started the fire, as well as filling the drinking bucket with water from the well.  Gram saw that the bucket only had one ladle from which all students drank.  She was concerned with the spreading of germs from the common bucket and ladle.  With her first earnings Gram bought each of her students their own cup. To her surprise the school board objected to this and sent a board member to talk to her regarding “her putting on airs” as students had always taken drinks with the common ladle.  Gram told the board member that her students would continue to use their individual cups.
Gram met, and fell in love with, a young man who lived down the hill from the schoolhouse. At that time, married women were not allowed to teach.  When Beth married Willis Dimock Kregloh, she had to give up her teaching position.   On her last day of teaching, the first little girl leaving the building offered her cheek for a goodbye kiss.   Immediately, all the students lined up, from little ones to good sized farm boys.  So, of course, Beth had to give a kiss to each student.  Gram told me that this went against her reserved British bearing, but she couldn’t leave any out, as each student was special to her.   Those students and her time at Melvin Hill, school district # 2, left Gram with many happy memories. 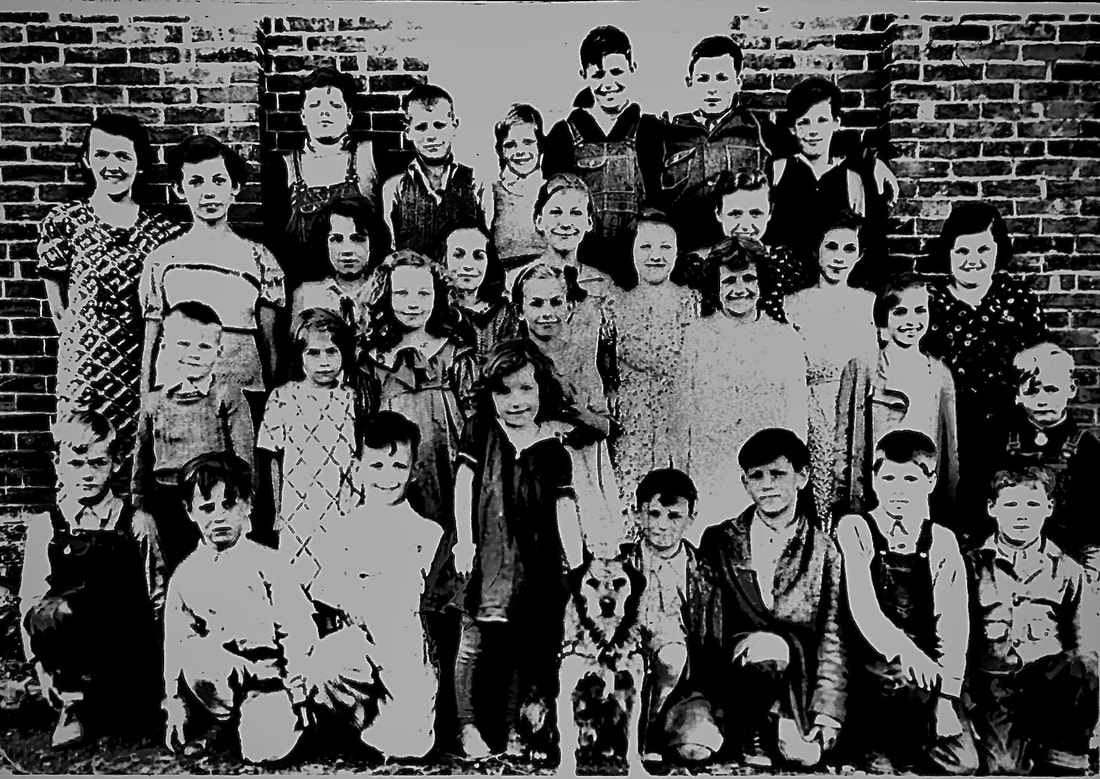 THE JOINT DISTRICTS Dr. Ronald Grube
​     In 1927, the University of the State of New York developed guidelines for consolidation of local school districts into centralized school districts. Phelps had 24 school districts but did not jump at the chance to develop a centralized school at that time. A sunset clause in a Works Progress Administration grant most likely encouraged the creation of Phelps Central School. That clause stated that if construction on a centralized school building was under way by no later than January 1, 1940, a grant of $74,250 would be awarded to the project.
A 1939 proposal to create Phelps Central School, including a building project, had to be voted on by each of the 24 school districts. They did not all have to agree to join. Any school district that chose not to join the centralized school was free to opt out. They would not suffer any loss of funding as a result. Some of the outlying schools, called joint school districts, chose not to join the centralized school. Joint Districts numbers 3, 4 and 5 did not join. They, instead, chose to join other centralized school districts that made more sense politically and geographically.
Joint District # 3, also known as the Alloway School, joined the Lyons Central School District. The school was located near the corner of Alloway Road and Leach Road. The location is in the Town of Lyons. The 1874 map of Phelps shows District number three in the northeast corner of the township but does not show the school as it was in Lyons. Sadly, we do not have a picture of this school. Maybe you do. If so, we would love to scan it and add it to our collection. ​
Joint District # 4 was eventually known as the Union Free School of Clifton Springs. It became a centralized school, located on Teft Avenue. Much more needs to be said about this important school. Certainly, all persons from the pre-Midlakes era will remember the great rivalry between the Clifton Springs and Phelps Union and Centralized Schools. This would make an interesting story – especially the sports rivalries over the years. Any volunteers to write this one? 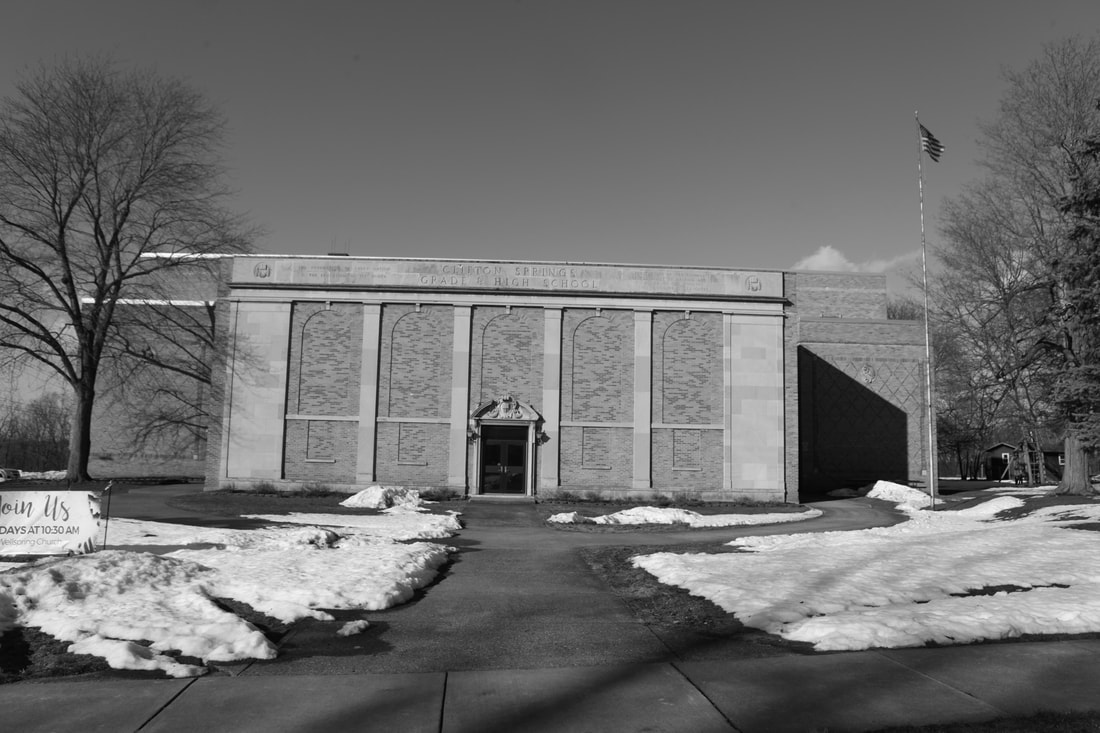 Joint District # 5 was known as the Gypsum School. The building still stands just west of the township of Phelps. It is on the east side of County Road 27 and across from the east end of Bunker Hill Road. After the school closed, children from District # 5 joined either the Manchester, Clifton Springs or Phelps Central Schools. The school was a beautiful cobblestone building. My great-grandfather, John Grube, remodeled this building shortly after it closed, turning it into a private residence. By the way, it is located just across the road from what once was the Gypsum Baptist Church on Co. Rd #27 in the Town of Manchester. The Gypsum history will be included at some later time.

It is very important that the PCHS collects as many stories and historical images as possible. We encourage you to write for us. We will edit your work and will place it on our website (phelpsnyhistory.com), in our newsletter or both.

Information used in this article came from “Important Facts About the Proposed PHELPS CENTRAL RURAL SCHOOL, 1939” and material in our collection at the Phelps historical society. Photos Barry Lee and PCHS files.
If you have any history to add to this story please submit the Schools Suggestion Form.